Soft starters work by removing inrush currents from the motor during starting. It reduces the torque, without using star-delta starting, auto-transformers or resistor starting. Once the starting phase is complete (steady state), the soft starter is "bypassed" by a bypass contactor. A bypass is used to short-circuit the starter, bypassing the current flow through the contactor.

They can control one to three phases, with three-phase control generally giving better results.

The benefits of a soft starter

Soft starters have different functionalities, they protect against overloads of electric motors thanks to an integrated thermal relay. They have a fault output and can perform a motor diagnosis. In addition, it can be controlled via a keypad or terminal block. Soft starters have a default memory and the curve can be set according to the application. 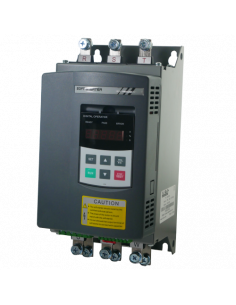